Most of the pedestrians in London seem to walk with their eyes fixed firmly on the pavement – perhaps searching for the gold that they hope to find there. But the real treasure of London lies at or above eye-level in the architecture that lines every street, and it is a genuine pleasure to get lost on its historic streets and places.

Unlike Paris or Munich, London is not a planned city. For a long time, London and its historic architectural development from Roman times, right up to its take on today’s expression of a bustling commercial and cultural capitol city, has been a slow building city. For most of the 20th century Britain’s tallest commercial building was in Liverpool.

Guide To The Architecture Of London, updated every 10 years or so, is still the best guide available after more than 30 years since its publication.

Guide To The Architecture Of London

Guide To The Architecture Of London

London has an unrivalled richness of architecture, from its squares and houses to its palaces and churches. This is the only guide to cover all of London’s building history, from its Roman foundation to the massive expansion of the 19th century which made London the largest city on earth.

London architecture is one of the best regarded examples of creativity, functionality and mixture of classic and modern, stone and glass.

Julius Caesar visited England in 54BC, but nearly a century passed before the Romans invaded in AD43, during the reign of Claudius. As a settlement London barely existed before the Roman invasion, and afterwards St Albans, Colchester, Lincoln, York and Gloucester were almost certainly more important administrative centres. But it was essential to the Romans to build roads to deploy their military strength in the new colony, and London’s convenient position – at a point when the Thames could be bridged and at a navigable distance from the open sea – placed it a the center of a monumental road system. Oxford, Watling and Ermine Streets all date from this time and established London’s essential armature.

London has an unrivalled richness of architecture, from its squares and houses to its palaces and churches. This is the only guide to cover all of London’s building history, from its Roman foundation to the massive expansion of the 19th century which made London the largest city on earth.

The book is a marvelous base to start studying the interesting buildings in London.Each entry gives a concise summary with clear conclusions on every building, if the authors don’t like certain features then these are pointed out.These summaries are intelligent and thought provoking and I would highly reccomend this book to both amateurs and practising Architects.

The commentary manages to be both informative and conversational, making it just as good a meander in an armchair as on the streets. (THE GOOD BOOK GUIDE)

This is the best book of this kind I have ever read, about any city, anywhere in the world. (Amazon review)

You can get the book from Amazon

Want to join the discussion?
Feel free to contribute! 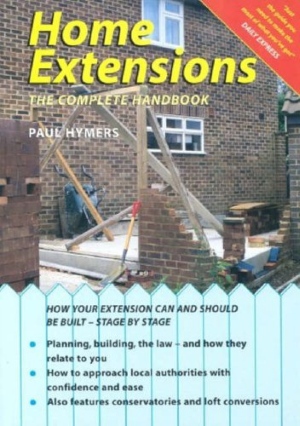 The book is perfect for anyone who wants to manage a home extension project. There is invaluable advice on all the major aspects of getting work done on time, safely and cost effectively

House Extension Designs participates in the Amazon Services LLC Associates Program, an affiliate advertising program designed to provide a means for sites to earn commissions by linking to Amazon. This means that whenever you buy a book on Amazon following a link here, we get a small percentage at no cost to you. That helps support Leon's curatorial activity for this website, and is very much appreciated indeed.

We may request cookies to be set on your device. We use cookies to let us know when you visit our websites, how you interact with us, to enrich your user experience, and to customize your relationship with our website.

Click on the different category headings to find out more. You can also change some of your preferences. Note that blocking some types of cookies may impact your experience on our websites and the services we are able to offer.

These cookies are strictly necessary to provide you with services available through our website and to use some of its features.

Because these cookies are strictly necessary to deliver the website, refuseing them will have impact how our site functions. You always can block or delete cookies by changing your browser settings and force blocking all cookies on this website. But this will always prompt you to accept/refuse cookies when revisiting our site.

We fully respect if you want to refuse cookies but to avoid asking you again and again kindly allow us to store a cookie for that. You are free to opt out any time or opt in for other cookies to get a better experience. If you refuse cookies we will remove all set cookies in our domain.

We provide you with a list of stored cookies on your computer in our domain so you can check what we stored. Due to security reasons we are not able to show or modify cookies from other domains. You can check these in your browser security settings.

We also use different external services like Google Webfonts, Google Maps, and external Video providers. Since these providers may collect personal data like your IP address we allow you to block them here. Please be aware that this might heavily reduce the functionality and appearance of our site. Changes will take effect once you reload the page.